Shippensburg football picked up its first victory over West Chester University since 2015 when the score was 27-11. The Raiders won 34-18 this year.

The Shippensburg University football team picked up its first win over West Chester University in six years on Saturday, defeating the Golden Rams 34-18.

SU (5-1, 2-1 PSAC) was led by its defense that forced five turnovers in the game and the offense scored 17 points off those turnovers alone.

However, the Raider defense managed to hold the Golden Rams to just 100 rushing yards and just 239 total yards on the day.

Redshirt-sophomore linebacker Tyler Petucci posted a team high nine tackles and forced a fumble, and senior Trey Paul had seven tackles and an interception — his fourth of the season.

The Raiders had a successful day carrying the ball as fellow redshirt-sophomores Bill Williams and Khalid Dorsey combined for a net of 160 rushing yards. Williams ran 15 times for 96 yards while Dorsey had 19 carries for 74 yards.

Redshirt-junior quarterback Brycen Mussina was 12-21 on the day with 168 yards, two touchdowns and an interception.

Graduate Evan Morrill finished with three catches for 83 yards, with most coming on a 71-yard touchdown pass from Mussina in the fourth quarter.

The Golden Rams decided to enter quarterback Zach Gilbert with 90 seconds remaining in the first quarter, but on his only play of the game he fumbled after a Petucci hit.

The turnover led to Mussina scampering into the endzone from five yards out four plays later.

The game slowed entering halftime, but on the first drive of the second half junior Mike Brewer picked off a heave downfield from quarterback Desman Johnson.

The very next drive for West Chester resulted in another forced fumble from junior Dante Witcher, but the Golden Rams fell on it in the endzone.

With 13 minutes remaining in the game and West Chester hanging around only down five, Mussina found Morrill over the middle and Morrill did the rest, sprinting to the endzone to put SU up 31-18 and put the game out of reach.

Freshman kicker Jaxson Montross finished 2-3 on field goals and is now 10-15 on the season. He has the most field goals in a single season since Billy Deane was 12-21 in 2016.

Saturday, the Raiders will head to Kutztown for a 5 p.m. showdown with the PSAC Eastern Division-leading Golden Bears.

Field hockey blanks West Chester, gets past Kutztown in overtime 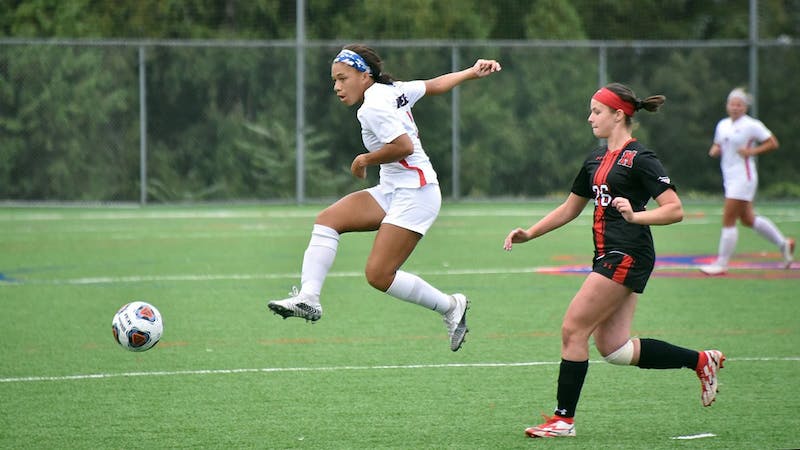