Renowned violinist Lin He joined the Shippensburg University-Community Orchestra for an hour-long performance in the Luhrs Performing Arts Center (LPAC) on Nov. 19.

The orchestra filled LPAC’s auditorium with the music from classical composers Mendelssohn and Haydn.

The concert opened with “Concerto for Violin and Orchestra in E Minor,” which featured a sleek violin virtuoso by He. He was later joined by the rest of the enchanting orchestra, which painted a warm and unified rainbow of sound as he continued to flutter his fingers across the strings. And as the second movement rolled across the stage, He’s violin sung like a weeping canary.

The classical concerto is broken down into three movements or sections. By tradition, the first and third movements are “Allegro,” meaning fast, while the middle of the piece is “Andante,” which means slow. Most composers use Italian terminology to describe their art, and the mood of their compositions.

Felix Mendelssohn wrote the “Concerto for Violin and Orchestra in E Minor, Opus 64” in the year 1844. Musicians widely regard this concerto to be one of the best concertos in existence.

“It is a timeless classic,” said Mark Hartman, assistant professor of music and director of the University-Community Orchestra at SU.

After a brief intermission, the group reconvened for Franz Joseph Haydn’s “Symphony Number 104 in D Major (“London”),” which was a four-movement symphony. This piece is known as Haydn’s magnum opus — a culmination of his lifetime’s work toward one skillful piece.

Haydn’s 104 was written while Haydn spent time in London. While in England, he had many more instruments and styles available to him, so he utilized whatever resources were available to him. The result of this was the inclusion of the clarinet, which is was an unfamiliar instrument in the realm of a symphony by an Austrian composer at the time.

Guest performer He, is an associate professor of violin at the Louisiana State University School of Music, and the associate concertmaster of the Baton Rouge Symphony. His mastery of the violin is indicative of the fact that he has been playing since he was 5 years old.

He and Hartman have an intertwined past. He has coincidentally been hired for various teaching positions where Hartman was his predecessor. Finally, the two met face-to-face during an American String Teachers Association conference, and further corresponded via email before He signed on to join the orchestra.

“The Violin is a lyrical instrument,” He said. He further likened it to the human voice, especially during slow movements. “It is an expansive and expressive instrument.” 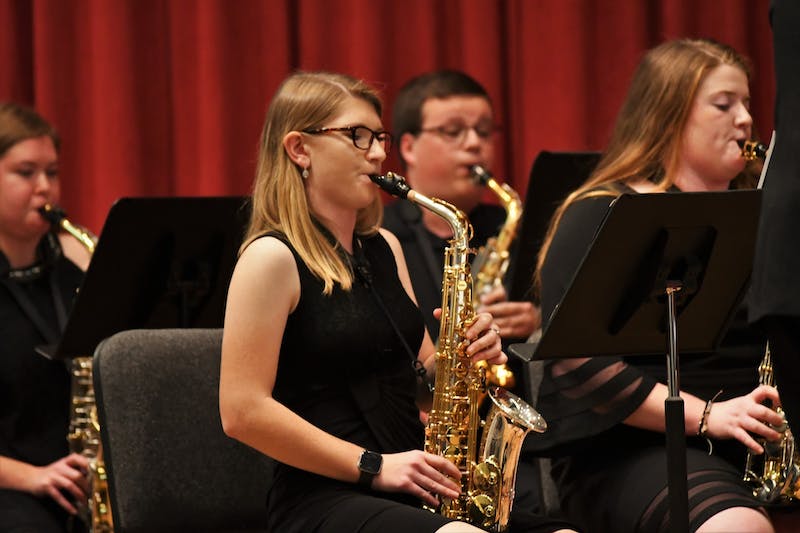